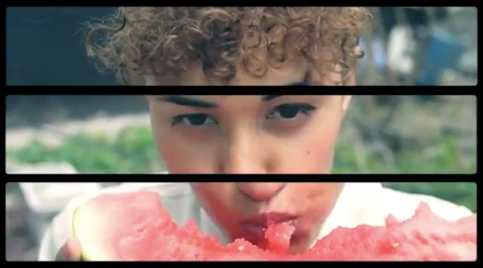 Filming yourself gorging on watermelon to the soundtrack of your own smooth, sensual, electro-pop sounds will undoubtedly grab the attention of many. Lorely Rodriguez aka Empress Of has done this successfully with her new video and song, “Champagne.”

People have been eager to know/hear more from the young Brooklynite. Releasing her “colorminutes” Youtube clips, sporting a Craigslist look-a-like website, and debuting at the Gorilla vs. Bear CMJ showcase has placed Empress Of on people’s radars with an extreme douse of curiosity.

For now, Empress Of dons two songs, “Champagne” and “Don’t Tell Me” (found below), both of which have been released on a new 7″ via No Recordings. Join in on the curiosity and follow Empress Of on Facebook, SoundCloud, and watch her new eyebrow raising video for “Champagne.”

Empress Of – Don’t Tell Me